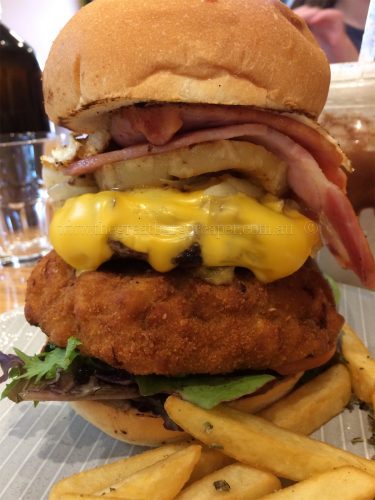 It was nearing the end of 2018 and probably one of the last chances I had for a burger. I wanted to try something new, so I headed to a new place in Ringwood East – The Burger Moore Café. After painfully watching this place open for months and months on facebook, it had finally opened and I was pleased to be trying it out. Interestingly, this place has a burger menu, crepe menu and breakfast menu. Obviously, it was all about the burgers for me!

I ordered the “King of Bedford” which came with 170g Grass Fed Free Range Australian Beef, crispy bacon, egg, beetroot, pineapple, lettuce, tomato, caramelised onion, cheese, house made relish and aioli. It was another “hold the beetroot” moment, and the mac n cheese shown in the extra’s got my attention so I added that to the burger too.

The burger was massive, and for a second I thought maybe I had over done it a bit?!…… Lol not a chance!! I was all in and ready to destroy this beast. Picking it up proved challenging, especially with the mac n cheese croquette. It was slippin’ and slidin’ more than Shakin’ Stevens, and for the first time in recent memory I did not feel overly confident about my grip, but I powered on and got stuck into it.

The patty tasted ok, but was slightly undercooked for me. Not that it was too pink in the middle or anything, it was just soft around the outside and didn’t seem to be chargrilled enough. The bacon was cold too – not cool, cold, which really put me off. I’m not sure it was cooked fresh and it certainly didn’t provide any crispiness that the burger needed. The lettuce was like it came from a bag of mixed garden greens from the supermarket and didn’t do the burger justice. The mac n cheese croquette was much bigger than the actually burger and half of it fell out. I know I added this to the regular ingredients, but it was also more mac and not enough cheese and together with a lack of sauces it made the burger even drier than expected. The highlight was actually the pineapple which was delightful and provided a great sweet taste to the overall burger.

Chips on the side were lightly seasoned and ok. I also went with a chocolate milkshake which was quite tasty.

Overall not a great experience, and given it had only just opened, perhaps it was an off day. Unfortunately, I’m not sure I will be rushing back to find out. It would be worthwhile getting down there to try out for yourself and see what you think.

Do you like bacon in a burger to be crispy?