Home / Throw in the Towel / Fate stepped in 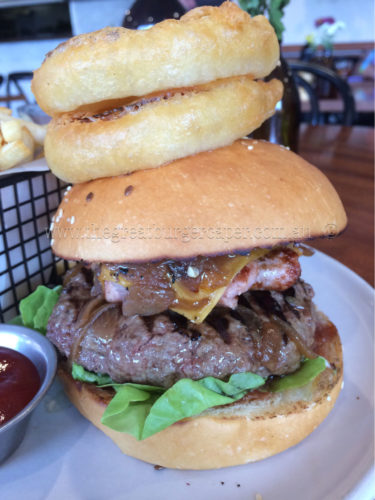 When you have a business meeting and the other party suggests a place that is on your burger bucket list, its customary to stay back afterwards and have a burger. At least it is now, because that’s exactly what happened recently when I met with Blue 51 Communications at “South Society Café” in Mount Waverley. This place had been on my list for a while, and I just haven’t had a chance to get there, so when it seemed that fate stepped in, I felt it was my obligation to try their burger.

The menu is filled with café styled regulars such as all day breakfast, salads, pastas and given there is only one burger on the menu, the choice was easy! The “waygu beef burger” (yes, that’s how it’s spelt on the menu – “waygu”, not wagyu! Hmmmm…..), anyway it comes with beef, caramelised onion, lettuce, jack cheese, AJs BBQ sauce and onion ring. I also took the suggested option of adding bacon too!

This was a good looking burger. Standing tall, with two large onion rings atop the mighty burger tower. I took off the onions rings and tried one and it was at that moment that I realised, I’m really not much of an onion ring fan. Too much batter and not enough onion for me, or maybe I just haven’t found the right one yet?! Not sure!? Anyway, I digress. Time for the burger.

The meat was soft and juicy, the onion tasty and bacon cooked perfectly. Having said that, the meat was also bland and lacked flavour. The onion took over the burger and not because there was too much of it, but because there wasn’t much of anything else to compete with it. And the bacon was folded over itself a few times, and ended up being thicker than the patty. Not sure who “AJ” is or what relevance they have to the place, but their BBQ sauce was average at best and the bun ripped apart from all the onion on top too. Finally, and probably most importantly, the cheese wasn’t even melted to the patty, but rather placed on top of the bacon?! As many of my regular readers know, it is my belief that Burger etiquette clearly states the cheese MUST be melted to the patty!

Chips on the side were ok and this time I went with the “tap juice” on the table to wash things down.

Overall, not a great experience. I think it could use a slice of tomato and some egg to give it more flavour. Plus value for money is terrible as it is definitely not worth $25.50!! The simple fact that they have spelt wagyu wrong speaks for itself really, so if you go there, maybe stick with coffee and their all day breakfast dishes if you’re game.

Which cafe does the best burger?

See other Throw in the Towel burgers. Start the conversation