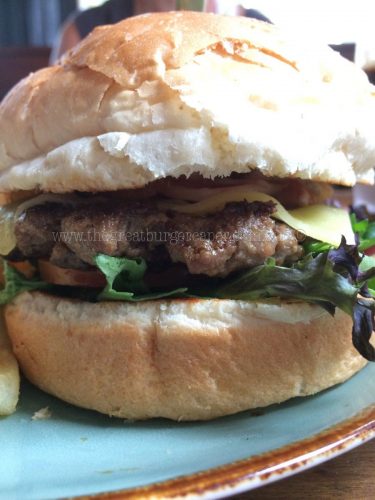 On holidays recently in Palm Cove and walking along the main street, I saw a chalk board sign on the footpath that read “Big Ben burger – can you eat it all?”. This, of course, grabbed my attention, so I made the effort to return a few days later for lunch as I needed to know what this was all about. The place was on Williams Esplanade in Palm Cove and called “Underground”. Café styled place with a varied menu of burgers, pasta and sandwiches.

Whilst I wanted to give the “Big Ben” a crack, it was a double beef burger and preferred to play it safe by trying a regular burger first. Plus, with the likelihood of swimming later that afternoon, I did not want to increase the risk of sinking to the bottom with all that additional meat inside me. Therefore, I ordered the aptly named, “Classic Burger” which came with house wagyu beef patty, cheese lettuce, tomato and underground tomato relish. I also added bacon to give it a little something extra too.

The patty tasted good – well cooked and full of flavour. Adding bacon was a good move too. Unfortunately, the thick, dry bun, was tasteless and took over the whole experience. Not to mention, the burger had rocket lettuce. I hate rocket lettuce! I’ve often said it’s like having weeds from the garden in your burger and this was no exception. I think I might start a petition to ban it. Burgers should only have iceberg, cos or butter lettuce.

Anyway, suffice to say, the burger was not the greatest of all time, and the $20+ price tag did not help either. Chips on the side were spot on – crispy and lightly salted. And after scooping out all the cream, the chocolate shake was really good.

When you are on holidays, you often take a risk on places to eat, and unfortunately, this place fell short of my expectations.

What’s your favourite type of lettuce in a burger – iceberg, butter, cos or rocket?

See other Throw in the Towel burgers. Start the conversation 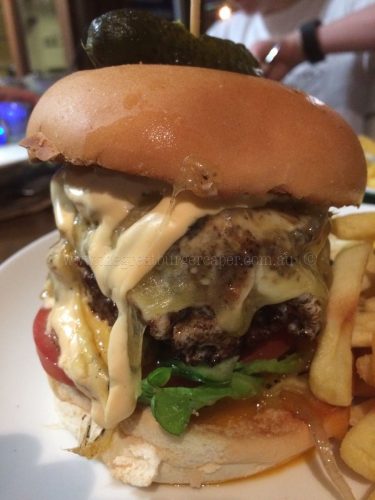 When you are on holidays, searching for a good burger can be tricky, especially when there does not appear to be any straight shooting, traditional burger joints around. So you take your chances on the local cafes and pubs and hope for the best, which is exactly what happened to me when I took a break up north for some sun in Palm Cove.

I found myself at “Apres Beach Bar & Grill”, which is a casual pub styled place across the road from the beach. I ordered the “Aussie Aussie Aussie” Burger which came with housemade beef patty, fried egg, bacon, cheese, lettuce, tomato, cucumber, caramelised onion, housemade rattle dressing and it was another “hold the beetroot” moment!!

This burger looked good on arrival, with a thick piece of meat and cheese oozing everywhere. The meat tasted pretty good too. It definitely had a nice, home made flavour to it, which I really enjoyed. The cheese, bacon and egg were tasty too. I’m not sure I liked the cucumber very much though and the rattle dressing wasn’t great either. The biggest problem was the bun. The first bite I took and it ripped to pieces. It got worse with each bite too, making it a very difficult and messy feast. Not to mention that it was simply tasteless and dry. Ugh!

Fat beer battered chips on the side were ok, and washed down with a few Pure Blondes on tap.

Overall, whilst the patty was really good, it was over shadowed by the bun, cucumber and dressing, making it an average burger experience (at best). Great pub atmosphere though, and the hand made pizza’s being made looked delightful, which is what I would go for next time!

What do you think of cucumber on a burger? 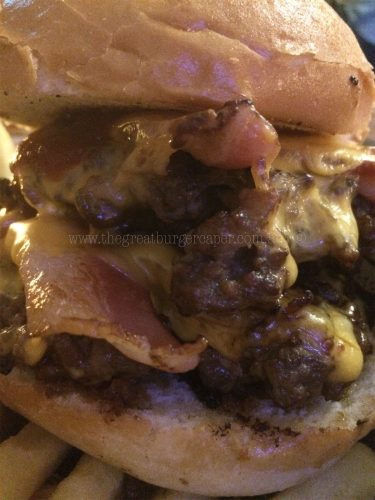 After a long day in the sun, it was time for dinner and after a disappointing burger at lunch time, I was keen to turnaround the fortunes of the day. This time, I was at IronBar Saloon in the main street of Port Douglas. This place is most famous for the toad races they hold each night, but before that I needed to fill up on something tasty.

I ordered the self explanatory, “Double Beef Burger” which came with (surprise, surprise) double beef, bacon, cheese and tomato chutney. This burger was a beast. It was heavy when I picked it up and once I got the right grip, got stuck into it straight away. The meat was so tasty and nothing short of sensational. The bacon was not crispy and cooked to perfection. Topped with the the cheese being on point too. As soon as I finished, I actually said “that was one of the best American styled cheeseburgers I’ve ever had!” and mark my words, it was. Add in a few cold beers and you’ve got yourself some of the best fun you can have with your clothes on. Seriously.

It was surprising that a small bar known for racing toads would produce such an amazing burger. That’s one of the things I love about this adventure, you never know what you’re going to get. Or is that a box of chocolates instead? Hmmmmmm not sure?!

If you are in Port Douglas make sure you make the trip to IronBar Saloon, not just for the toad racing fun, but to try out their Double Beef Burger – you won’t regret it, so hop to it! (Yes, that just happened!! Lol)

Where is the best cheeseburger you’ve had?

See other KO - Knock Out! burgers. Start the conversation